After completing his junior year at Texas State University, Matthew spent his summer internship at Schwab in the Austin location. At the time, Matthew B. was not part of a team, but rather, interned as an individual architect in Schwab Technological Services at the firm. Matthew expressed that his manager eventually found a team for him to be a part of as he began his full-time career at Schwab: “It was called the SNE (Shared .NET Environment). It is Schwab’s Internal Cloud Team, I guess is the best way to put it. So, I worked with them for about three years. Then after the third year or so, there was an opportunity for me to work for Schwab.com as a front-end web developer.”

With not being part of a team, Matthew had an unconventional start to his internship, but it also helped prepare him for his future roles at Schwab: “It was interesting because even though I was coming into the office, I was a remote intern because he [his manager] was based out of San Francisco and I was based out of Austin at the time. For me personally, it was the only internship I had ever done. It gave me the confidence to know how to work within Schwab because I had to reach out to technical directors, managers, managing directors, developers, everyone just to kind of talk to. It gave me confidence when I started here as an associate working for a team and that was actually a little different for me.” 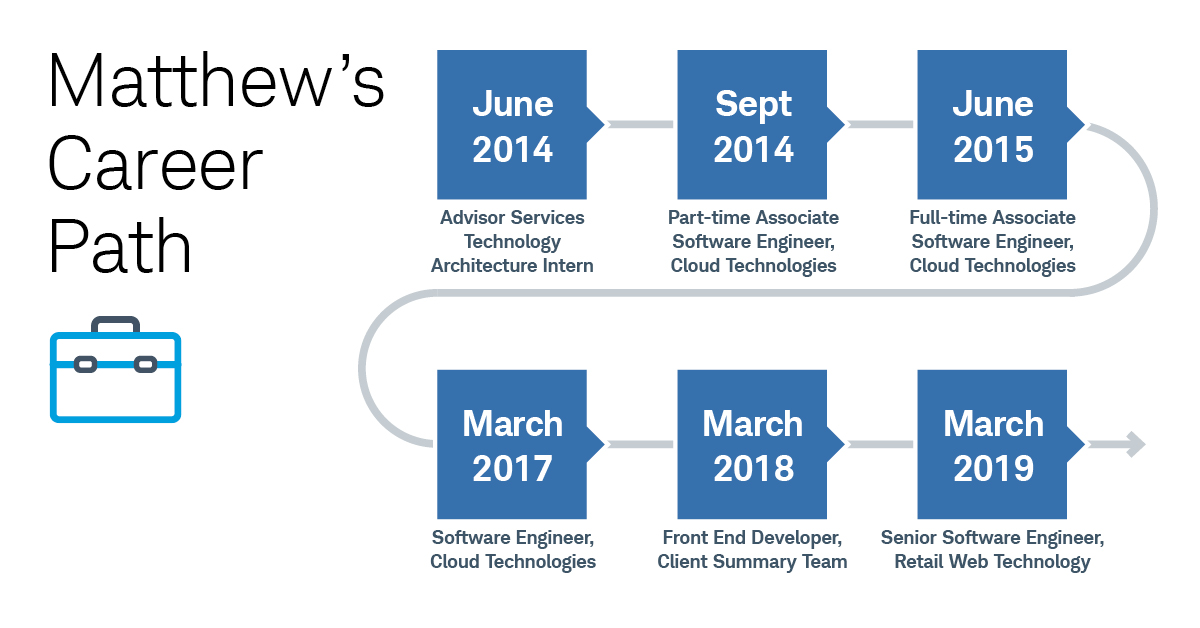 What also was different for Matthew was his background coming into Schwab as an intern. Before he started his career in coding and developing, Matthew actually had a background in the hospitality industry and was not sure of what his career path would look like in the future: “I had no plans on becoming a software engineer, it kind of just fell into my lap, I am not going to lie. I have a really big experience in restaurants, I used to run kitchens. I used to be a kitchen manager for Cheesecake Factory and I was a thirty-one-year-old intern. If it was not for me going to school, I just knew that I wanted to be in some form of technology. I did not know what area; I do not even have a computer science degree.”

Matthew went on to earn his degree from Texas State University in Computer Information Systems and after spending three years on Schwab’s Internal Cloud Team, Matthew transitioned to working on the client summary page. He gave a brief overview of how long he has been at Schwab since his start as an intern: “So as soon as you log in to Schwab.com, the very first page that loads up your summary, that is the page I work on. I have been in this position for about two years and I just had my sabbatical, so it has been about five years total. Throughout that entire time, I started off as an Associate Developer and I worked my way up to a Senior Staff Developer.”

Working with a Supportive Team

A major part of the reason that Matthew was able to continue advancing his career path was the support that Schwab provided him through senior leadership and his mentors. About two and a half years ago while Matthew was on the Schwab.com team, Matthew experienced a family emergency and had no choice but to leave his current location in Austin, Texas, and move to Tampa, Florida where his wife’s family lived. As he was preparing to put in his two weeks’ notice and resign, Matthew mentioned how his manager would not let him leave and was there to support him throughout this time: “My manager actually would not let me quit and he is the one that worked out me working remotely. He is the one that put everything in motion. I gave him a few days because my resignation was supposed to be effective immediately, but he begged me to give him a few days to just work out some of the details and I said ‘of course’ and he worked it out. I have my manager’s full loyalty because I know he has my back and I have his back and that to me has made Schwab an enjoyable company to work for. It is just the people that I work with and management that has always been supportive.”

With moving his way up from an Associate Developer to his current role, Matthew has also been able to learn some lessons of his own that have helped continue his personal and professional development: “Always have a positive attitude and be willing to learn new stuff. I still learn new things every day here, there is some part in technology I never heard of, never knew, a query I have never seen, so it always keeps me on my toes.”

In addition, working at Schwab for five years has sparked his interest in moving to a different side of the business than he has been used to: “Well I have a really supportive manager, which is crucial for any future plans that I have. He supports me in any direction I want to go in. So recently I said I wanted to go more towards to management side instead of the technical side, more the people person route versus the technical route. As I became a senior staff developer, I have not coded as much, I am involved in more of the business side  -- more planning, more working with business, and working with people. Through that work, I realized that it is not that I am better suited for it or not. It has nothing to do with that. It is just that I happen to thoroughly enjoy it. Hopefully, I can become a senior manager one day and work that route, that is my goal.”

Lastly, Matthew was able to reflect on his time as an intern and gave words of advice for future interns on how to grow their own career: “Work at a sustainable pace. Do not burn yourself out. The work will never end. There is always a new emergency, always a new initiative, always a new thing that needs to happen. So, if you cannot sustain your work, you are going to be burnt out really quick.”

From his time in the kitchen at Cheesecake Factory to his current role as a Senior Staff Developer in the finance space, Matthew is a great example of what it looks like to Unleash Your Potential and pursue what Ignites Your Passion. At Schwab, we provide the resources and support to help you Own Your Tomorrow – whatever tomorrow may bring.

Interested in starting your own career journey with Schwab? Learn more about our Intern Academy here.

Apply today to our openings in Engineering and Technology!